Epic Fishie Facts The Message in a Bottle

We all have reeled in that Mysterious Bottle procured with a message from within, I am very excited to say here is a blog that you can get involved, Our bottles of messages in FH don't really give us a message so it had me thinking let us write out own! Any one who wishes to Givve a message to distant shores in the distant or near future Can and With the comments below you can give your message to me and those who wish to participate will get their messages places in a little glass bottle and set off into the ocean to be found, lost, or float for all of the ocean's days ^_^

Those who wish to do this be sure to sign with your SL name, Date it, and be sure to specify what contry or province in which you reside. no personal information is needed just a fun activity to feel involved in and i know just the place to go to to do this, I'm rather excited to see what you all come up with! ask questions, make jokes, pass along profound wisdom of our day and age. Please no cursing, or threats. let's keep this positive ^_^

The History of the Message in a Bottle from wikipedia 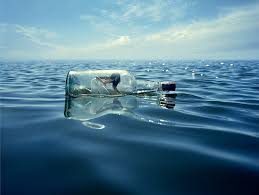 The first recorded messages in bottles were released around 310 BC by the Ancient Greek philosopher Theophrastus, as part of an experiment to show that the Mediterranean Sea was formed by the inflowing Atlantic Ocean.[1]

On his return to Spain following his first voyage to the New World, Christopher Columbus's ship entered a severe storm. Columbus threw a report of his discovery along with a note asking it to be passed on to the Queen of Castile, in a sealed cask into the sea, hoping the news would make it back even if he did not survive. In fact, Columbus survived and the sealed report was never found, or at least, its discovery never reported.[verification needed]

In the 16th century, the English navy, among others, used bottle messages to send ashore information about enemy positions. Queen Elizabeth I even created an official position of "Uncorker of Ocean Bottles", and anyone else opening the bottles could face the death penalty.[2][dubious – discuss]

In 1784 Chunosuke Matsuyama sent a message detailing his and 43 shipmates' shipwrecking in a bottle that washed ashore and was found by a Japanese seaweed collector in 1935, in the village of Hiraturemura, the birthplace of Chunosuke Matsuyama.[3]

Since 1876, people have often used messages adrift in containers to communicate from the remote Scottish island of St Kilda. [4]

In 1914, British World War I soldier Private Thomas Hughes tossed a green ginger beer bottle containing a letter to his wife into the English Channel. He was killed two days later fighting in France. In 1999, fisherman Steve Gowan dredged up the bottle in the River Thames. Although the intended recipient of the letter had died in 1979, it was delivered in 1999 to Private Hughes' 86-year old daughter living in New Zealand.[5]

In February 1916 the doomed crew of Zeppelin L 19 dropped their last messages to their superiors and loved ones into the North Sea. These washed up on the Kattegat coast nearGothenburg, Sweden six months later.[6]

In December 1945, American World War II veteran Frank Hayostek tossed a bottle over the side of his ship. It was recovered by an Irish milk maid, Breda O'Sullivan who set off an exchange of letters that lasted seven years before the two finally met amid an international media circus. Despite (or perhaps because of) the media attention, the two were never able to get their romance off the ground.

In May 2005 eighty-eight shipwrecked migrants were rescued off the coast of Costa Rica. They had placed an SOS message in a bottle and tied it to one of the long lines of a passing fishing boat.[7]

On June 10, 1914, a scientist from the Glasgow (Scotland) School of Navigation cast 1,890 bottles into the ocean to test undercurrents in the seas around Scotland. One of those bottles was recovered in 2012, and was confirmed by Guinness World Records to be the oldest message in a bottle ever found—98 years.[8] The bottle was found east of Shetlandby Andrew Leaper, skipper of the Shetland-based vessel Copious, the same fishing vessel involved in the previous record recovery.[9]

On the 13th of March 2013 the world’s largest message in a bottle weighing 2.5 tons and measuring 30 by 8 feet was towed 200 nautical miles off the coast of Tenerife where it was released to the ocean currents.[10] The bottle was registered as a boat and equipped with AIS and radar reflector and navigation lights. It was constructed by Bård Eker, the owner ofKoeningsegg. Every eight hours it is uploading photos to its personal twitter[11] account live via satellite. The initiative was a PR-stunt[11] from Solo who invited people to follow the journey online via a gps in the bottle - and make a guess of where it would end up. The bottle is still at sea, but expected to end up in the caribbean in the summer of 2013. The bottle was baptized in Marina San Miguel by explorer Jarle Andhøy.[10]

On April 17, 2013, a bottle has washed up on the shores of a beach on the mouth of the Neretva river, near Dubrovnik, in the far south of Croatia, a full twenty-eight years after being thrown into the sea in Nova Scotia, Canada - a journey of around 4,000 miles as the crow flies, but this bottle probably made a journey at least five times longer.[13]

How cool would it be to find a real message in a bottle? Well, that’s exactly what happened to these people. Some were simply beachcombing while others came to find the bottles by a pure twist of fate. From love notes floating the oceans for more than 80 years to historical messages from Auschwitz prisoners these bottled messages will captivate you. Next time you’re at the beach keep your eyes open for any bottles near the water, you never know what you’ll find!

Construction workers working near the former Auschwitz concentration camp found a bottle encased in a cement wall they were tearing down which now houses a vocational school.

“In 1944 there were camp prisoners constructing a bomb shelter for the soldiers and they must have placed the bottle in the wall as they were pouring concrete,” said memorial spokesperson, Jarek Mensfelt, to The Local.

The letter which appears to have been scribbled on a piece of cement bag was signed by 7 Auschwitz prisoners, among them 6 Poles and 1 Frenchman aged 18 to 20-years-old, the letter also included their camp identification numbers.

Based on the names and identification numbers, Auschwitz-Birkenau historians were able to determine that 2 of the Polish men had survived the Holocaust, but their whereabouts were unknown.

According to Mensfelt, finding concentration camp survivors can prove difficult so the Auschwitz-Birkenau memorial and museum sent out a personal appeal for anyone who may know these prisoners to contact them.

Later in 2009 Mensfelt spoke with the granddaughter of the French prisoner, Albert Veissid, who just celebrated his 85th birthday in Marseilles, France.

Veissid told French news agency that he doesn’t remember the bottle, “yet it’s absolutely my name on the message and my registration number: 12063. I can’t forget that number because it’s on my arm.”

The letter was scheduled for delivery to the Auschwitz-Birkenau Museum on May 6, 2009.

Thank you weveryone for the fish, for fishing, and all the support!! Love to you all! <3333
Valky