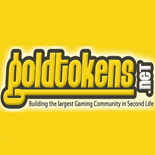 Goldtokens.net is now a community of tens of thousands people around the world that participate in our games and all our other services we develop for Second Life users (from SL end users to SL businesses). It was created by an inworld advertising network. In a way we could say that advertising enabled development of very successful games in Second Life. For me it is a much more than just an ordinary community - its a driving engine for innovation and creativity. Our growing community empowers us to do more, do better at providing or improving services that bring new pleasures and possibilities for members of this community. Afterall this is what a virtual world is for, to create something new that did not exist before and to be able to experience something new and further the technological evolution of humankind.

Just like funds gathered from advertising and advertisers have enabled the evolution of one of the biggest and most successfull tech companies in the world. Google was the 1st company that successfuly funneled the funds from advertising industry into creation and development of infrastructure and applications that made life easier and more fruitfull for billions of people around the world.

I've always admirered the ingenuinity of Google founders who created the biggest private incorporated tech business incubator in the world. They've created a new business model that we can adopt and build on to create the World 2.0 in which corporations work for benefit of the people and instead exploiting them they give them tools to advance themselves. Google has shown new way to manage the company in digital age. It is a hybrid between holding company and social venture. They've created small startup like businesses in within their company. They're embracing the startup spirit and taking out the risks, stress and human insecurity out of their work environment to enable innovation and creativity of their teams. Funds from existing successful projects and advertising fueled funds enable them to have hundreds of competing teams.

This is exactly what I've done with my life - I took away stresses, risks and insecurity from my life and it has helped me to tap into secret pocket of creativity that I did not know I have. Rejection of conventional and the urge for something more has risen me from the average. I demand nothing less than that from people I work and cooperate with. I am fighting against worries, stress and uneccessary psychological tension that are in current world systematically produced (there only because system we live under is unefficient). I've learned that learning in stress free environment is much more effective than learning under umbrella of old age (prehistoric) education system that is still using some of old totalitarian methods to make you fit the buerocratic paper requirements instead of setting you free and helping you tap into your potential and equip you with knowledge to further human economy and improve it for others.

One needs to be trully free from all authorities, stressors and other limitation factors to human psyche to be able to really learn, create and innovate. Only free people can trully reach their full potential. In our own heads, our minds we can experience such freedom. We can move beyond limitation and we can experience things in different way but only if we dare to imagine how things could be better. In our mind we can experience something that is not yet but it could be. These new experiences feeds our imagination and makes us creative. One that uses that and creates something new can be successful.

I believe there is a business model that is so advanced and humane that it can sweep off with old conventional business as usual. We're going to discover it through technological means. Second Life is currently the best environment to experiment and cultivate such business.

So far closest to this new business model that would fit the World 2.0 is Google. This corporation has been able to provide on the market something that not many other companies are able or willing to compete against because they'd need to cut prices.

Google is not a perfect company. What I like about their business model is that it enables them to grow company profits that they fuel into new products and services that they then scale up using new more efficient(economical) technology which enables them to lower their product and service costs to the extent that in many cases they are offering services to people for free that other companies would charge for. This makes other companies practically unable to compete with them on these products & services.

Company Zynga who produces games that are played over browser by millions of people has initially grown their revenue from advertising revenue aswell. What they fail to produce for their users (games players) is user driven system and that can only be achieved with economic trading system that players can use to trade with each other - Zynga money currency is useless outside of the realm of Zynga. They don't have user driven exchange system like Linden Lab has created with Linden Dollar or Entropia Universe with their PED currency.

Advertising and successful products are fueling our company aswell just like it is or was the case of the companies mentioned above. Our goal is to go from a current community of our services users and players of our gaming systems which can be counted in 10s of thousands to million users. We will be keep improving our services and game systems and will be adding new ones with goal to cultivate new more efficient business models.

I love it when you wax philosophical, Wili! This post, and your post about the power of team spirit, clearly came from the heart. When you write posts like this is becomes clear to those of us who worry about such things that your strategy and your vision go well beyond superficial and superfluous metrics. Bravo zulu, Wili! What a mind you have.

I am curious about your thoughts on Apple's business model. Do you see them as a Google type company, a Zynga type company, or another altogether?

Thank you Amy. And now with the new mall, everyone is happier too :) Cheers!

Apple is currently in business model of milking the cow. Now when Steve Jobs is gone we will see what will happen with Apple. They certainly need a new visionaire who would be able to envision new products for the company and to keep up with new frontiers. They have a lot of cash and know how and we'll see if the company can keep up on the long run or will it become a new sleeping giant resting on its platform like Microsoft.