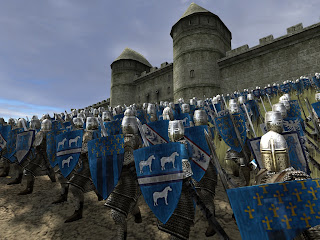 For seven days and nights the war raged on. Attack after attack sent to try to break down the defenses of the outer keep.

Several times a day an owl would bring the reports of the most recent battle to the hands of Crista and then return to it's post to await another. Crista would hand them to Drago who would always announce a victory. For Einherjar had not been broken. The defenses were holding.

"HUZZAH!", the crowd would cheer and then continue about seeing to any wounded. Many would spend the day fishing for food for the encampment as well as the troops. Ris and his companions, who had returned to the camp many days ago, would take the gathered food to the outer keep twice a day and then return to help watch over those within the inner camp.

Upon the 5th day Drago sent out an attack of his own. If they would not stop attacking he would have to show the strength of Einherjar. Drago was saddened to do this because he was not a war monger but if they would not end the beseigement, he could no longer sit by idly and do nothing. Again the report came in and again Einherjar was the victor.

In the 6th & 7th days more attacks came in and went out. Einherjar was holding strong.

Upon the morning of the 8th day there was an unnerving silence. As the camp awoke, there were no swords clanking, no battle cries, only the quiet of the breeze.

Crista sent owls out upon the winds to gather news and then turned to Val and Drago, "I do not trust this silence. Something is not right."

Val looked to Drago for an answer as well. Drago looked at them and his face, hardened by the week long battle softened, "Worry not. They believe us fools, but we are not. What has been done cannot be undone. I do not trust this silence either but let us enjoy the moment and make ready for what is to come." With that he took Val's hand and they moved to a private room within the Great Hall.

Crista understood they needed the moment together and returned to the encampment. She whispered to Dragonna, "It is not over but we are charged to keep the people calm and enjoy the respite, however long it might be." Dragonna nodded and looked to FreyAruna. Frey knew what was needed and began playing upon her pan-flute, a quiet but happy tune to fill the void of silence.

Days and more passed and nothing. Only silence from the other clan. No more attacks came. Einherjar continued to send out attacks and take over their farms and outposts, but only one or two at a time never 6 or 8 the way that they had done.

An occasional attack was sent back but never with the force of what had begun the war and each time Einherjar prevailed.

By mid month Drago had stopped all outgoing attacks. None had come to Einherjar in over a week and he believed it was time to show mercy. The unfathomable war had begun because he attempted to free his own people. The non-stop onslaught had finally ceased and at last he believed that it may remain as such.

Once again Drago addressed the people, "Good folk of Einherjar, I know this time has been trying but you have shown the heart of this great land by supporting one another and the troops. I believe that we finally may return to our homes. The war is over, for now at least. If they begin again we CAN defend and we WILL prevail. So be at ease and return to your farms. Send word if you should need the Hammers of Einherjar, for they are always at your service."

The camp became busied with activities of breaking down and cleaning up. People made ready to return to their homes. Soldiers came from the outer keep to escort those who had a distance to travel. 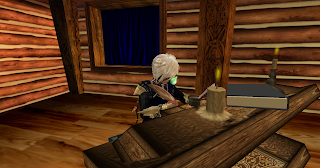 Crista slipped into the keep and moved to her writing desk to make note of all that had transpired. She didn't want to forget a single detail because someday this month of battle would be known as a great time in the history of Einherjar. Someday the children's children's children would talk about this as the First Great War of Einherjar.