Einherjar The Silence is Broken part 10

Days passed in silence but the damage had been done. Einherjar was on the move to take down the Evil Empire who had so ruthlessly attacked them.

Crista worried that the silence was not a good sign. She worried that this would not be the last Einherjar heard from Evil Empire and all too soon she would find out how correct she was. 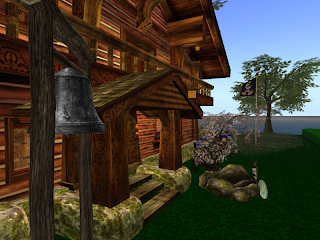 In the great dark of the midnight hour the bell once again tolled. People nearby came running to see what "new" danger had arisen, but the danger was not new. Evil Empire was once again on the move.

Crista, newly appointed Justicar of Einherjar, stood ringing the bell. As the people gathered she ceased the clanging and waited for Drago to speak.

"Crista," he spoke quietly, as he had just awoken and was a bit dismayed, "why have you once again tolled the bell?"

Crista looked at the leader and then to the crowd. She was unsure if she should speak in front of all. Drago saw her concern and spoke softly, "It's ok Crista, just tell us all what has happened."

Crista pulled a scroll from her sleeve and began to read a report from one of the new members who was scouting the field, Ashton. The letter read "Crista, I have word of Evil Empire. They have begun several marches across the land toward many of our settlements. Their plan seems to be an all out attack against us. They mean to take over Einherjar."

There was more but before Crista could continue Drago was roaring with laughter. "They mean to take over Einherjar?!? HA! Crista, gather the military leaders and all the clan members who can fight. We have been preparing for this and Evil Empire shall find nothing but trouble and the ends of our swords." With this he turned to go to the war room to make ready for the counter attack.

Val looked out upon the people and said "If any feel the desire to come to the Keep for safety we will make ready for that as well. Take word to the surrounding settlements." Then she turned to join her beloved.

The people dispersed to take messages throughout the land and make ready the Keep for people to take refuge.

Dragonna, who had been keeping watch, turned to join the others inside. Crista sent owls upon the wind to gather the Generals and then turned to follow Dragonna. The Great War was not yet over.

great story,enjoyed it very much, if only the Einherjar spearmen were as daedly as your pen...laughs